UPDATE: Nobel House is officially open as of Tuesday, January 15.

Here’s a look at the Glen Ellyn menu: 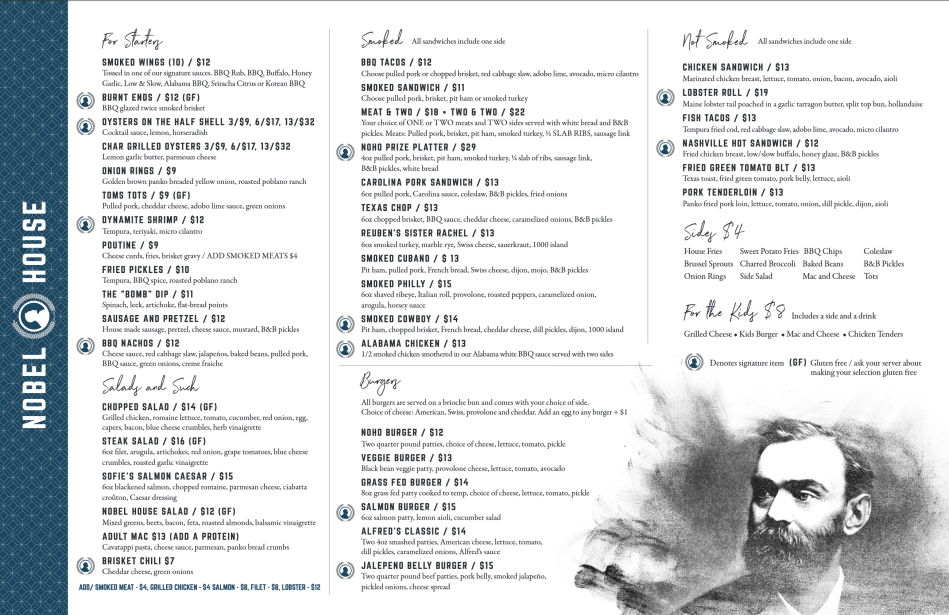 UPDATE: According to the Nobel House Glen Ellyn Facebook page, they will be opening in mid-January. This is still mildly annoying that they won’t give an exact date. I was hoping “mid-January” might still mean in time for the Bears vs. Eagles this afternoon.

No such luck. However, there is now at least a light at the end of the tunnel…

It’s August 1st and there is still no Nobel House to venture into after I get my hair cut at Busy Bee later this week. I’m surely not the only one a little bummed out by that fact.

Back in December when Glen Ellyn released their calendar of upcoming business openings, Nobel House along with future building-mate Sushi Ukai were both supposed to have opened up this past spring.

Delays in restaurant openings have come to be expected, but I was especially hopeful this time around after Nobel House hung up a giant banner on the outside of the old Soukup’s building proclaiming the spring opening (the banner has since been covered up, which is a shame because it was a very nice looking banner).

Finally though, I can say with at least above average confidence that the wait is almost over.

According to the man in charge of the restaurant’s construction, Glen Ellyn should be able to enjoy all that Nobel House has to offer later this month. On July 19 the Director of Construction Dennis Kintop said it’s looking like a “strong month” away from opening as he gave a video update on his One Man, One Project Facebook page.

A “strong month” doesn’t sound overly optimistic, and while this same man previously projected a mid-July opening, his latest video update shows off many updates throughout the building. Among the items crossed off the construction checklist:

I meant no disrespect to Dennis Kintop for getting my hopes up over a July opening, I’m thrilled that he gives us these Facebook updates at all. I actually did a little googling on him and found that he seems to be a pretty great guy. Check out this Chicago Tribune article from 1999 for a little background. I hope he’s used for future projects in the area.

For a little more on what to expect when Nobel House does finally open, here’s how they describe themselves on their Geneva website:

Our food is prepared from scratch and features smoked meats, fresh seafood, and our market chalkboard created by our chefs.  Our menu also includes many delicious gluten free items, vegetarian options, and so much more. You do not need white table cloths to serve high quality food.

Nobel House has 30 beers on draft and a variety of bottles/cans featuring local and nationally recognized craft breweries, handcrafted cocktails made with fresh ingredients, and a fantastic wine list. 2 comments on “When will Nobel House open in Glen Ellyn?”